About Magna Carta by David Tucker

On the image below you can pan and zoom to see in detail any part of the document. To zoom in use the mouse wheel, or spread with two fingers on a tablet or smartphone. 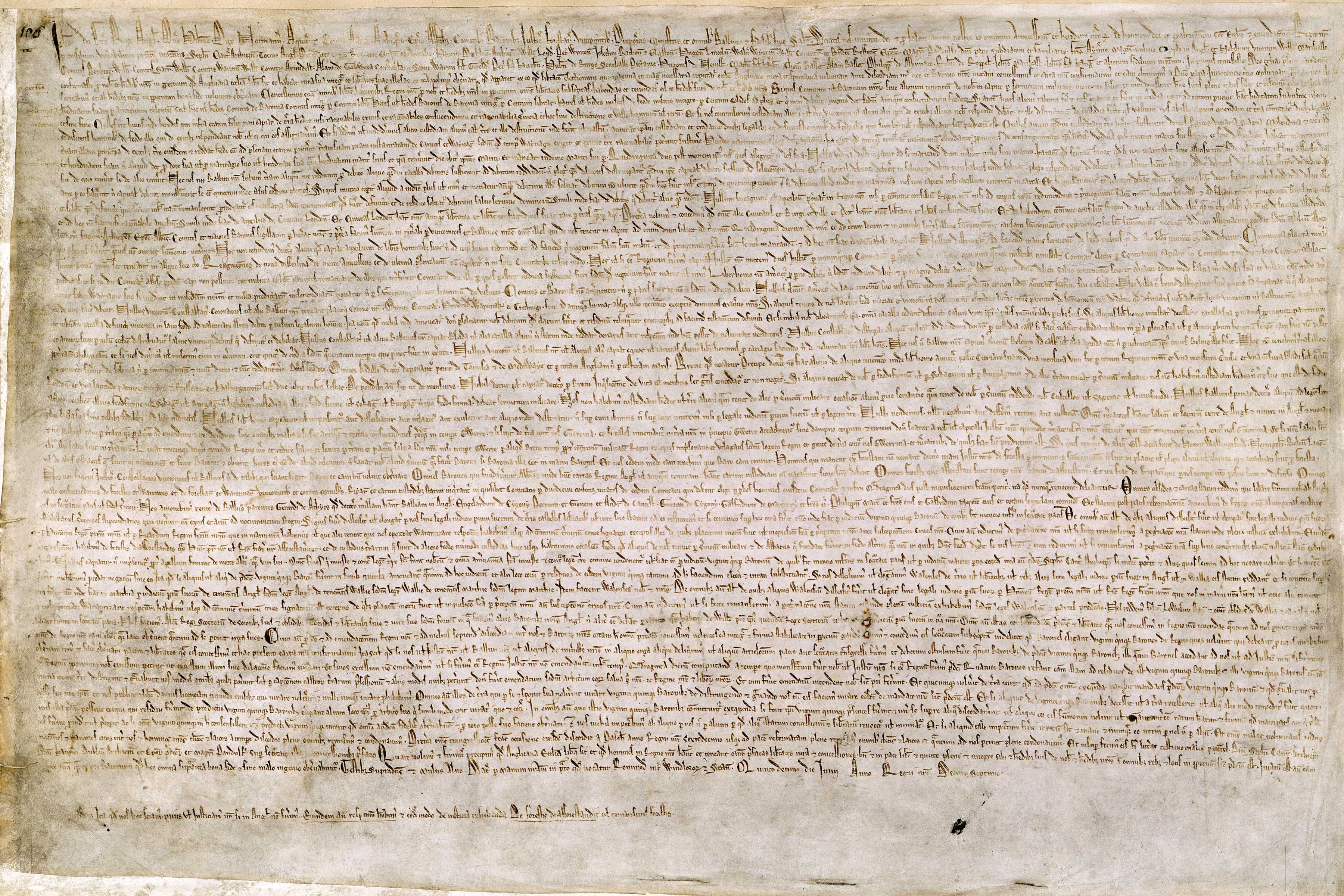 Magna Carta is a very important document in the constitutional and legal history of this country, and Thirsk has a special link to it.

A summary of its provisions in modern English is HERE.

In 1215 the country stood on the brink of civil war. King John and his predecessor King Richard had sought to raise great sums of money in taxes and the sale of favours, in order to pay for crusades and wars. The legal system did not operate as we know it today, with independent, fair and unbiased procedures. Payment to the king could result in a judgement in your favour or in delaying an opponent’s case.

A large group of the barons of England gathered to seek a remedy for their long-standing grievances. All kings were liable to have to handle a rebellion, but the barons did not try to overthrow John. Instead they drew up a list of those grievances and the remedies they sought. This can be seen as the first political manifesto. Importantly they wanted the king to conform to the customs of previous reigns and not push up the price of favours and the number of taxes. They wanted him to stick to the laws and customs, not to disregard them when it suited him.

John procrastinated, but when the barons captured London in May 1215 he had no choice but to negotiate. Runnymede was chosen as a convenient point near the king’s base in Windsor and the barons assembled in London and Staines. It was also a place where an ambush was difficult to carry out!

John was forced to make many concessions. The barons knew that previous kings had made promises and kept them, so they needed some way of making sure that John kept to the deal. The Charter has 63 clauses – it is a very long document, hence its name the Great or Large Charter. Clause 61 is known as the Security Clause: 25 barons were appointed to supervise compliance by John with the terms of the Charter, and the barons were empowered, if John failed, to seize his property.

One of those barons was Baron de Mowbray, a descendant of Baron d’Aubigny who came over with Duke William of Normandy in 1066, and de Mowbray’s estate was in Thirsk.

As a peace treaty Magna Carta was doomed. And putting the barons in charge of compliance was extremely unbalanced. John immediately persuaded the Pope Innocent III to declare the whole thing void. It lasted just 10 weeks. Now the barons, having failed to bring John under the power of the law, decided they had to replace him, and invited the French king to invade. Civil war broke out again and only ended after the death of John in 1216.

John was succeeded by Henry III, aged 9. His protector, William Marshall re-issued Magna Carta in a modified version, in order to secure support from the barons. It was re-issued again in 1217 and 1225 and 1297, and was repeatedly acknowledged by succeeding kings. This is what ‘gave it legs’ and made it the most memorable document in our constitutional history.

There is a direct link between Thirsk and the Magna Carta. On 5th March 2015 the Mayor of Thirsk, Mrs Janet Watson received a facsimile copy of the Charter from the Lord Lieutenant of North Yorkshire, Mr Barry Dodd CBE. Attending the presentation to Thirsk was Lord Mowbray, the titular successor to William de Mowbray, one of the 25 barons who negotiated with King John at Runnymede.

In the video Barry Dodd, the Lord Lieutenant says I am Her Majesty's personal representative in this county and I am here today to present this facsimile of the huge charter, the Magna Carta, to the town of Thirsk. Her Majesty in her jubilee address confirmed that she believes that she is the protector of [wind noise]. It actually started here, this is the first bill of human rights. It was signed under duress because of civil war [wind noise] was the Baron de Mowbray whose direct descendent is here today, it is very kind of you to be here. This is the land of Mowbray Castle on Castlegarth so that is the very special link Thirsk has with the first bill of human rights in the world and this copy, this facsimile here today, is on parchment of sheepskin - it is very rare nowadays, this is a proper copy - and I am very proud and pleased to present it to the Mayor of Thirsk.

Then David Tucker, on behalf of Thirsk Council says Ladies and Gentlemen, this is a very exciting event. Perhaps the most interesting thing to say is that Magna Carta was a flop! It was supposed to be a peace treaty, it was supposed to be in force for ever. It was a promise of better times to come. As a peace treaty it lasted for ten weeks, but it got legs because it was re-issued in 1216 and 1217 and 1225 and it was great inspiration at the time of the American independence and you will find in the American constitution, and in the constitutions of a number of American states, words from Magna Carta. Thirsk is a fantastic place to be in, to live in, to go to school in and this is going to be yet another feature of living here in Thirsk.

The facsimile is on parchment. It is a copy of one of four copies of the 1215 version of Magna Carta, reproduced with the kind permission of the British Library. It is printed on sheepskin parchment by the firm of William Cowley, Buckinghamshire, the only commercial manufacturer of genuine sheepskin parchment in the UK.

The link between Thirsk and Magna Carta lies in William de Mowbray, who was one of the barons involved in the creation of Magna Carta in 1215. William de Mowbray was a descendant of Baron d’Aubigny who came over with Duke William of Normandy in 1066. One of the de Mowbray estates was in Thirsk. The surrounding area bears his name as the Vale of Mowbray.

Add your publicity (including FREE)